A Great Day Out in Durbs!


Oops, it was a public holiday today so I was thinking I'll post these photos tomorrow... Monday...but I've just realised that TODAY is actually Monday lol...so, better late than never! Every Saturday morning there is a fleamarket held here on Essenwood Road {which now has some unpronouncable Zulu name but it'll always be Essenwood, no matter what the signs say...} I've never "got around" to going...initially I steered clear of anywhere "close to town" after our first crime-ridden 6 months here, then I got too busy, but this is the year of spreading my wings - wow am I glad I did - I have been twice now & it's definitely one of my fave outings! 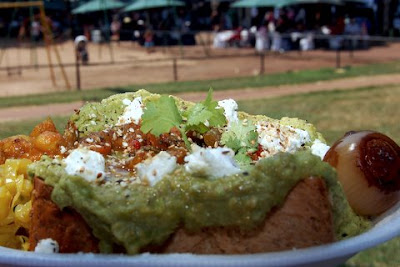 This avo spread on homemade bread brunch is one of the main highlights for sure...at R28 {US$3.75} it doesn't come too cheap, but has feta & roasted veg on top too & the option of adding whatever sides you like, from the array of pickles, seeds, herbs & home-made chutneys! "To Die for Doll" as they say here in SA! 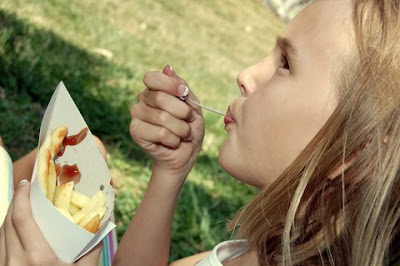 Cami & Reilly are hardly health-conscious so their choice was the "chip 'n dip" {also with whatever sauce/s you fancy" }. Note Cami's french polish on her finger nails - one of the benefits of having a 16 year old sister! 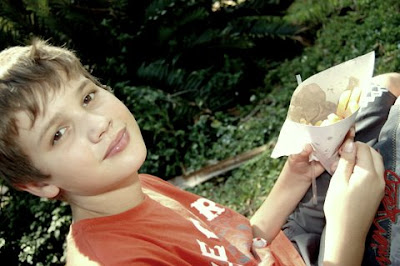 I took these photos while reclining on the grassy bank at the side of the market - where we ate our brunch - listening to local reggae band "The Meditators" - their music is so mellow that it's tempting just to close your eyes {something I don't advise doing in a public place in Durban ;-D} & stay put for a couple hours... 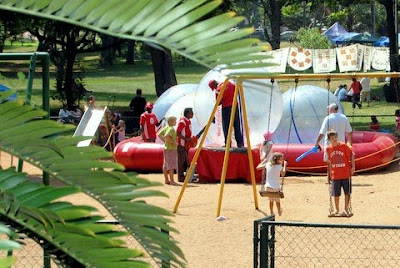 The park was full of regular people {as opposed to vagrants & criminals - the usual clientele} so for the first time ever {apart from the beach} my kids got to benefit from being in an open, municipal area & enjoying an amenity. You can see Reilly there standing on the swing & Cami next to him, sitting down on the other one. We didn't investigate the giant balls at the back but there was a charge for those & I think they are only for smaller kids. 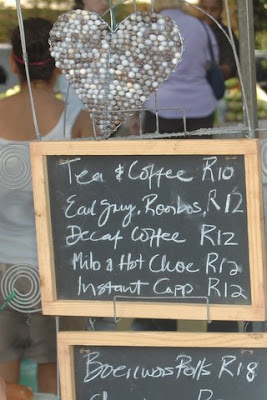 There were ample food vendors selling a wide variety of offerings, from traditional "bunny-chows" {hollowed out loaves of bread with meat or vegie fillings} to more Indian food - curries, rotis, flatbreads, etc {bearing in mind that Durban has a massive Indian population, second only to Mumbai I think...} Greek delicacies, all the usual sweet stuff {cupcakes, etc} & the local staples like the "wors rolls", melktert {milk tart} etc. So it pays to arrive hungry! 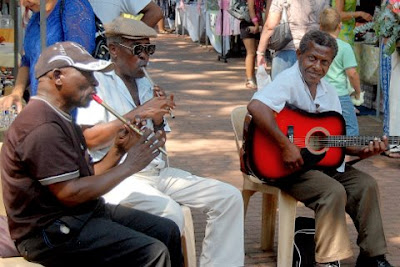 There were several groups of buskers playing music with the guitar case open for donations ...as close as we'll get here to the "tubestation" experience in the UK...the above lot were pretty terrible! ;-D 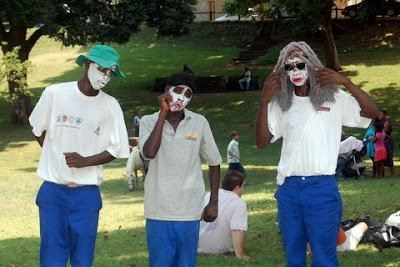 These guys were highly entertaining. They are "human-statues" & literally hold their poses for ages...until someone drops a donation in the case in front of them...then they dance about all over the place for about 10 seconds...then FREEZE! I couldn't think of a worse job in this humidity as the sweat must have literally been rolling down their backs, especially with hats/wigs & make-up on! 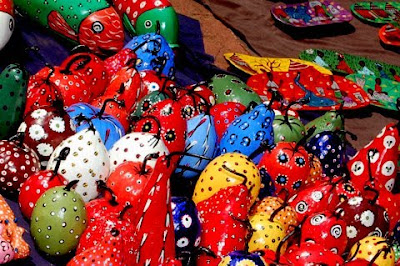 There were several local vendors selling brightly-coloured wooden items or gourds like these. I used to have a house full of them in Zimbabwe when there was literally nothing else to decorate with, so quite honestly I'm over them! 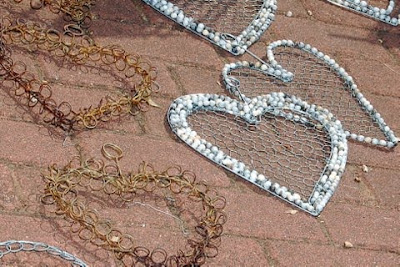 These were GORGEOUS...only problem was I didn't have enough cash on me {& they only take cash at the market...} and it's something I don't usually carry - it being by far the safer option here to use "cards". 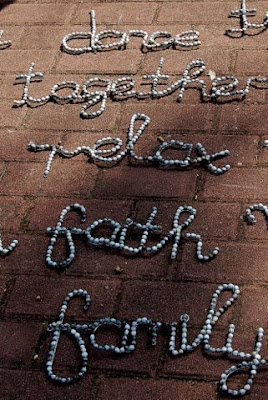 Aren't those words the perfect decor? Can't wait to add some of those to the walls of our new home! They are made of seeds threaded onto wire & are very popular in home decor shops all over Durbs right now. 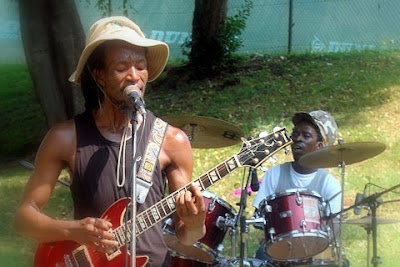 And I really admired these guys...The Meditators - local reggae band - apparently they don't get paid any kind of "retainer" at all by the Fleamarket organisers, and there are 8 of them altogether. They set up on the lawn with massive speakers, amplifiers & mixers & spend a solid 4 hours there with hardly a break, all for a pittance I suspect {whatever donations are tossed into the case in front of them}. 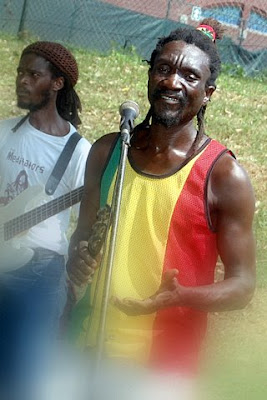 When there are so many criminals not prepared to work for a living it was great to see this bunch do their thing & in my opinion the Fleamarket just wouldn't have the same vibe without them.

What a fabulous market. Glad you had a great time and made the most of being amongst the "regular people" and not the criminals and vagrants. LOL

I always enjoy visiting a flea market & what u guys have is awesome too :) lovely shots!

I love this post. The details and the photos really gave me a feel for the place. And I identified so much with how EVERYTHING has to be considered with crime and potential for crime in mind. It is the same here in Jamaica. We seldom can "be" outside of defined spaces, but when we can it's so very nice.

I used to LOVE going to Essenwood flea market. I got some awesome boots there which were stolen just before we left SA

Seems like this post stirred up a few memories for some of you girls hey?! Yes Andrea, the parking IS a nightmare & I was about to give up on Saturday & just go home when a spot came up. I am not one for walking far to the car, particularly as I always have expensive camera equipment around my neck. I can't wait for the world cup then I will have so many photo ops as everyone will just think I'm another tourist lol! The crime situation in that park is terrible during the week. The DHS schoolboys {the school borders the park} are continually mugged in it when walking to the shops, etc, so I am so glad that I have discovered that on Saturday mornings we can enjoy it & sit on the grass & the kids can have a little play ;-D

I visited the Essenwood market when I was in Durbs years ago, and loved it. Such a variety of goodies and so well priced too.