Our Instructions:- Create a LO and journal your playlist, the music you fill your home/ipod /car with. Is there something that will help you feel happier, get you out of a funk? Why is your music important, what makes your choice special to you. Specific artists, an era (the 1960's or the 1990's?) 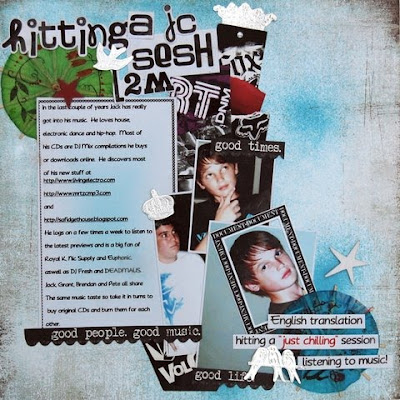 I don't listen to a lot of music. I like various types but someone else always gets to the radio/TV/Ipod docking station before me so I've given up trying to compete & just leave my family to make the selections! Life's simpler that way. If I do have some time when I am in one place for a reasonable amount of time on my own, I usually just put on the radio, tuned to our local East Coast Station, just to keep up with what's current! So, with music not playing a huge role in my life, I decided to focus on Jack for this layout. 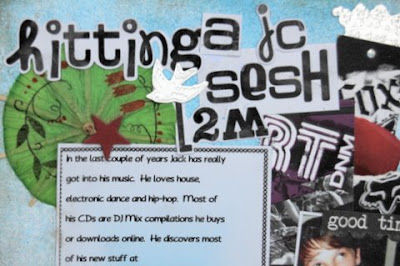 When I ask what he's up to after school, often he is lying on his bed listening to music & tells me he's "Hitting a JC session" so I decided to call my layout "Hitting a JC sesh L2M" then added a footnote title at the bottom of my layout that reads:- "English Translation - Hitting a 'Just Chilling' session listening to music". I printed my title onto photo paper using a free font from Kevin & Amanda, called "Elise", then cut it up & lifted some of the ink using sticky-tape - to give it a grungy look. For my embellishments I used metals from the making Memories "Vintage Findings" line & a couple of old cocktail umbrellas {LOVE using these!} & chipboard stars, a strip from the latest GCD line {cut up into 3 pieces - words} & some ephemera {swingtags from Jack's latest clothing purchases - Fox, Volcom & RT Denim}. 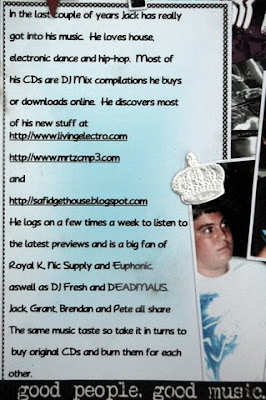 My journaling reads:- "In the last couple of years Jack has really got into his music. He loves house, electronic dance & hip-hop. Most of his CD's are DJ mix compilations he buys or downloads online. He discovers most of his new stuff at http://www.livingelectro.com,http://mrtzcmp.com & http://safidgethouse.blogspot.com. He logs on a few times a week to listen to the latest previews & is a big fan of Royal K, Nic Supply & Euphonix, aswell as DJ Fresh & DEADMAUS. Jack, Grant, Brendan & Pete all share the same music taste so take it in turns to buy original CDs and burn them for each other." 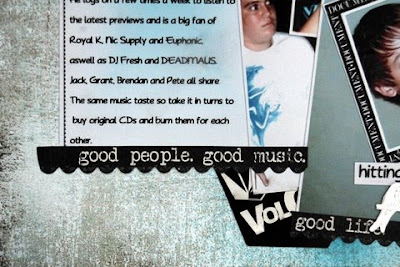 I used a Theresa Collins Journaling Card as a frame around the main photo {just cut out the centre using a craft-knife}. Oooooooh & I forgot the most fun part! Before I started I sprayed the Basic Grey background paper with my NEW - FIRST EVER - ONE & ONLY - MAYA MIST! Finally I got hold of one, courtesy of Cocoa Daisy, in their latest kit. Hydrangea...and I LOOOOOOOVE it!!! 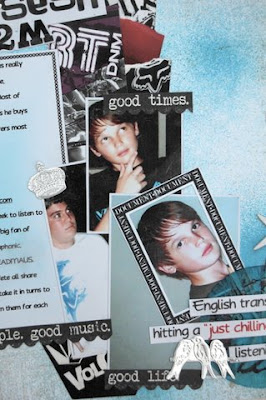 Steps to completing this layout, in order, were;-

2. Spray mist {just beyond the centre, where all the elements will be placed}.

3. Position journaling block first then "collage" title above, photos to the side & second part of title towards the bottom.

4. Before sticking everything down finally mix in your other elements, embellishments, etc, over & under for a layered effect. 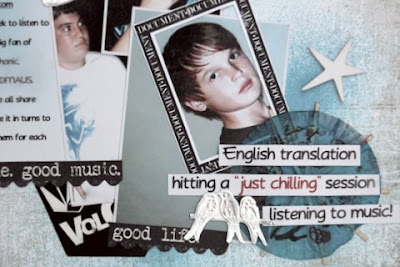 Me hopey you likey ;-D

Yes me likey all right. LOL. Such a cool layout and now that you have started to use the sprays you won't stop now and just have to get more colours. LOL

Haha - gotta laugh at your excitement over using the glimmermist!glad you're enjoying. I spied this challenge, and wondered how I would tackle it if I did it, as although I LOOOOve music, when I am by myself, I just enjoy the peace! maybe that's scrapworthy in itself??LOL

Loving the mist for sure!! Thanks for sharing how u created the layout!! Your boy is growing to be a very handsome man, well music plays a big part in a teenager's life for sure :)