I wish I didn't always have "only 5 minutes" & actually scheduled about 20 minutes for this session, but teenage foolishness got in the way & these two firstly went AWOL {sauntered off to a nearby coffee shop on foot...} then returned with only 15 minutes to spare {Jacqui was on her way back to Zimbabwe & Shane was about to take her to the airpost} then, to top it all, she couldn't find her cellphone! So 10 out of 15 minutes was spent hunting high & low in a {very} messy bedroom {Chelsea's} {BTW she ended up leaving without her mobile, which we later found under one of my car seats!} 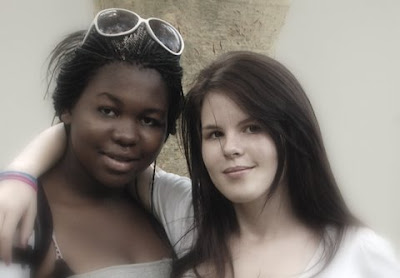 So...I was left with FIVE minutes {that I had to INSIST on} in order to capture some candid shots of Chelsea & Jacqui before she left for another 2 years. Chelsea met Jacqui at Junior School & they became thick as thieves in Gr. 5 {7 years ago}. Jacqui has a single mother so when we lived in Zimbabwe she spent plenty of time with us when her mother was away on business, which was often. Since we moved here Jacqui has spent 4 weeks with us, divided over 2 visits, one every 2 years. Unlike some of her other friends from Zim, Chelsea & Jacqui are always able to pick up where they left off & have an enormous amount of fun together. 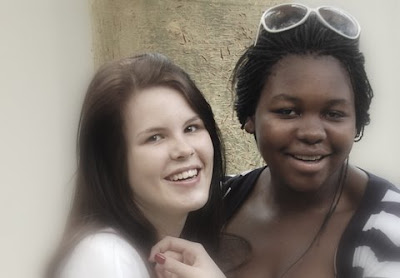 Due to the rush I didn't have time to play about with my settings so stuck with AUTO & the shots were less than stellar. I salvaged about one third of them & edited the hell out of them lol! 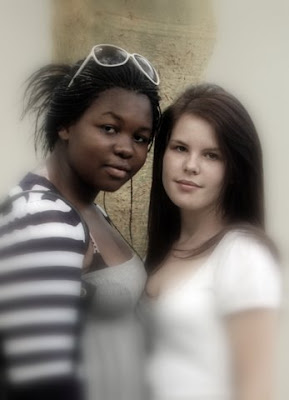 Despite having finally installed PSE 7 I haven't played around in there much due to lack of time, together with the fact that I'm totally at home with Picasa {free photo-editing software from Google & totally awesome IMO}. 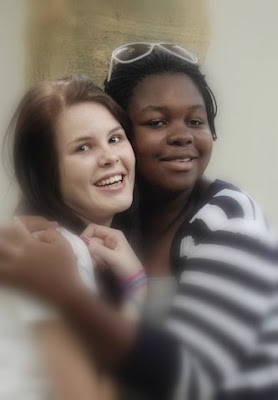 I love that the shots are so "unposed" {even though they were "posed"} & you can really "see" the genuine connection between these 2 girls. How did I do it? I always start by going through all the shots & eliminating not-so-good ones & choosing the best out of similar shots. It took me years to bring myself to EDIT {as in REDUCE} the amount of original photos taken but it HAS TO BE DONE. Less is more, really. 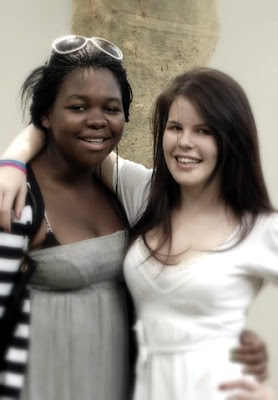 Then I straightened {the background tree was at an angle so looked weird lol} & cropped {always do that to get rid of any distracting elements - in this case gutter down-pipes}then I desaturated {click on "Saturation" & pull slider across to reduce the colour saturation - similar to a PSE vintage "action"} then lastly I "soft-focused" to blur the edges. With Picasa you have total control over how much blur & the size of the blurred area. It's all manual, which is time-consuming but, being the control freak that I am, it suits me down to the ground!

Female friendship is a fantastic gift.
It is wonderful to me that you celebrate it thus.

You did very well for a 5min shoot!lovely pics.

You are very good with the editing...I just get irritated and give up.

Thank you. Truth is the editing took longer than the shoot, but fortunately I love it & could edit for hours, often do in fact, so I don't mind!