One of the things I love about blogging is occasionally I get a little insight into what life is like in other parts of the world. I love to follow blogs with photos of local locations, shopping receipts, any little snippets of local information; to me it's one of the real benefits of blogging!

Here we have a public service strike taking place right now, into it's 2nd week. Everyone has a lot to say about it but few really know what they're talking about. I am of no opinion, neither one way or the other, as I don't know all the facts so can't pass judgement. I took a drive around my neighbourhood today, camera around my neck, to see if I could capture some images for you. I couldn't do a good job of it! I was an unwanted presence!! 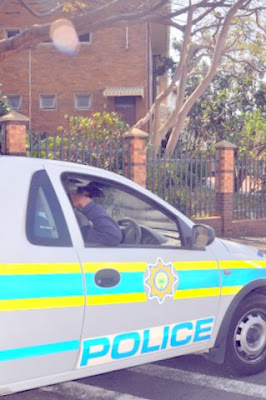 What I saw was a bunch of people, about 40 of them, driving from school to school {there are about 9 schools within a 5km radius here!}, squashed into about 8 small vehicles, followed by a convoy of about 8 police trucks/mini-busses. Their modus operandi was to go around from school to school blowing vuvuzelas! I kid you not!! Only a few weeks ago the vuvuzela was a symbol of joyful abandon, now it is just a noise aimed at disturbing the peace! {hey, isn't that in itself a crime?} Others remained in their vehicles, arms outstretched on their horns! A noisy affair!! 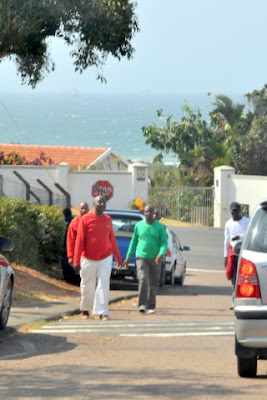 Anyway, these people didn't seem over-emotional, after all they've probably been doing this for days & are getting a bit tired of it all by now. The police didn't seem too perturbed either. They either sat in their vehicles or stood outside them, not bovvered...All in all rather civilised by African standards. There has been one newspaper report of "union members" beating up some junior school kids studying at a Sports Club, but, as the Union leaders point out, anyone can put on a Tshirt & give them a bad name, rather like muslim extremists. 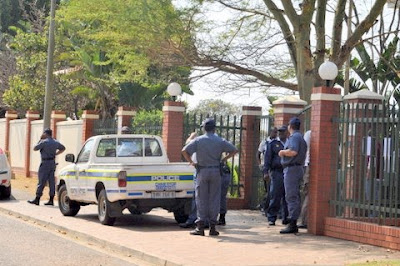 People have literally been dying in hospital due to lack of nursing care or being unable to have surgery as scheduled & the army have been called in to "guard" the patients & staff. I'm pretty sure some of those on strike are not necessarily "for the cause" but with intimidation no doubt running high it is safer for them to stay away. Fortunately my family has not been affected by the hospital workers strike but my kids have spent a week off school, and we were advised by headmasters, over the weekend, to return. 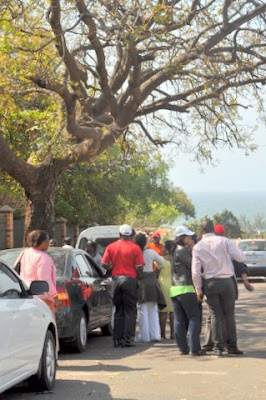 I am staying at home every morning as we are recieving at least daily sms/text updates so I want to be close-by in case I need to swoop in, SWAT style & grab my kids lol...I don't mean to sound flippant here but you must understand that this is nothing new for me, being a born & bred African I have been a part of many a hair-raising situation in my lifetime. What we have here are a bunch of human beings wanting a better quality of life. That is all. I don't envisage them wanting to harm my children. Unfortunately there are always the "bad apples" that rally around "conducting" the vuvuzela orchestra, but those types are everywhere...

For the younger kids, I'm of the opinion that a bit of time off school can't be a bad thing. They work them far too hard here methinks in any case. 7.45 - 2.00 is a loooooooong haul for little souls, who then have to fit homework & extra mural activities in after that. For the older kids, my son participated in the school musical every night last week so for the drama boys the days off were actually a blessing in disguise as they really benefitted from the recuperation. For my daughter in Matric it's been business as usual & she is currently writing her Finals Trials at a secret location, in civilian clothing.

I'm sure it's been a tremendous reshuffle for her school but they have done marvellously at keeping the finals girls focused on their studies & not a day has been missed. While wage negotiations have reached a stalemate, with both the Government & the Unions now refusing to budge, what we are witnessing here is actually a struggle between the young blood & the old stalwarts & we, the public, are just the political football they are kicking around.

A well written article with some interesting photos. Who could not want to be at school with such lovely views of the Indian ocean??? Anyway, this could have appeared in the editorial column of todays newspaper. A political commentator in addition to your many talents ! Well done !

Sjoe Helen...you should have been a reporter. Well written my friend.

I'm not too fussed either about D being at home - she is only 12 after all. Our matrics have been unable to write the mock exams as the exam papers have not arrived.

I just think they could have timed it a bit better!

Thank you for stopping by my blog, and for your kind words about my artwork.
I have had a look round your blog,& it all looks lovely here.
You really should be a journalist as you write fluently.

Interesting. We have just had a planned teachers only morning so they could vote on whether they would strike on another 'planned' day for better wages - wouldn't want to inconvenience anyone! It's all so damn civilized in comparison, its funny!LOL Hope the disruption settles for you soonxx