The Mid-month challenge at Once Upon a Sketch is Up! {Forever Indebted to You Layout using Crate Paper's Emma's Shoppe} For Men!


Actually it's been up since Friday but I had a busy day getting some assignments in then my family visitors from Malawi & Gaborone on Saturday THEN the Colour Combos Galore 200th Combo Anniversary Blog Hop post to prepare on Sunday & a crazy day running around all over the place yesterday, which brings us to today :) !!!
So if you haven't yet taken a look at the new sketch here it is for your convenience. 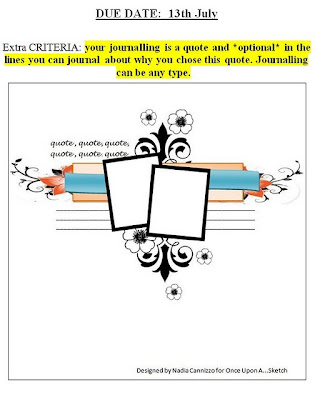 You have until the end of the month, as usual, to complete it, together with the journaling prompt specified (this time it is a quote) plus an explanation of the quote should you require some additional journaling.  The prizes are EVER SO AWESOME...
A whole array of  MANOR HOUSE CREATIONS FLOWERS {yes they're new & they are awesome!}, a pack full of gorgeous Imaginarium Designs Chipboard {I've linked you up to a post there where they feature THREE of my layouts - woop woop!!}  (The novelty of seeing my work on another site still hasn't worn off...so please excuse me!)...and there is also ALWAYS a random prize (so that no-one has an excuse not to enter if they think they are "not good enough" and that is the complete Pink Paislee Lily Bee Collection sponsored solely by my dear friend Nadia Cannizzo, Once Upon a Sketch's creator & the brains behind it all ... 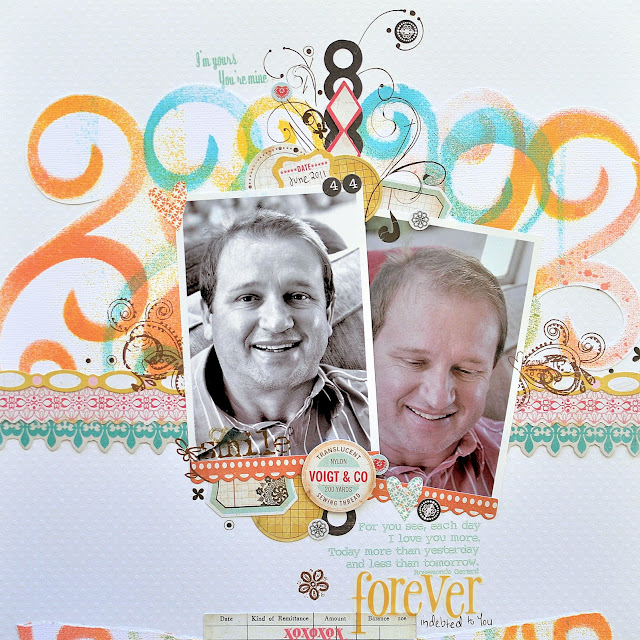 So enough blurbing...here's my layout!  Finally one featuring my better half, Shane!  Isn't he a cutie?!  I sometimes wonder how the man puts up with me!! 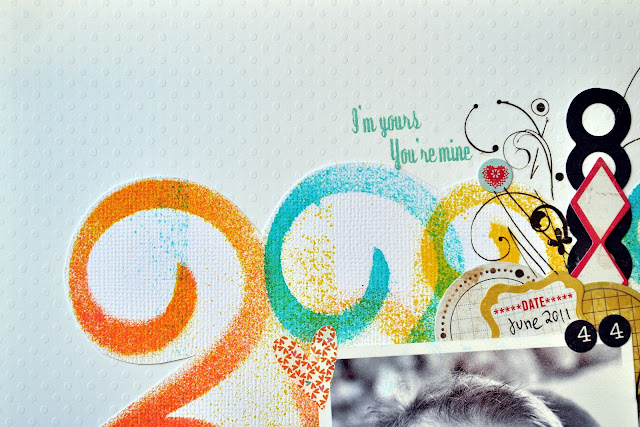 Originally I wanted to use chipboard swirls but mine were all finished, however I still had the negative chipboard where I had popped the swirls out of, so I used this as a mask & misted with 3 colours of mist.  It looked a tad overwhelming so I decided to cut some of them out instead & adhere them onto a white Bazzill swiss-dot background instead. 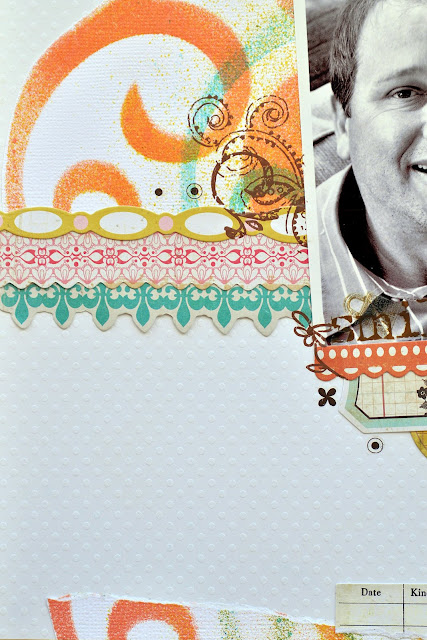 I used Crate Paper's Emma's Shoppe for my embellishments - how random is that - considering it is a line primarily aimed at little girls, I would say...?!?!  Well I am trying to use up all my last bits & pieces from January 2011 CHA so I can clear the decks for my next stash haul from July CHA you see... 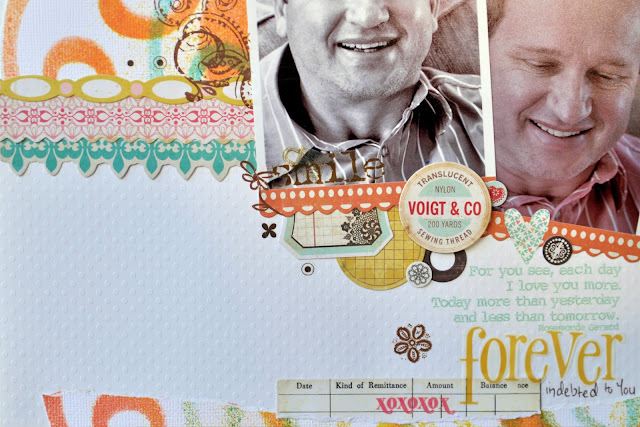 Notice the accounting slip sticker from the same line just above - saying "date, kind of remittance, amount, balance" ???  Well that is what inspired my title "Forever Indebted to You". 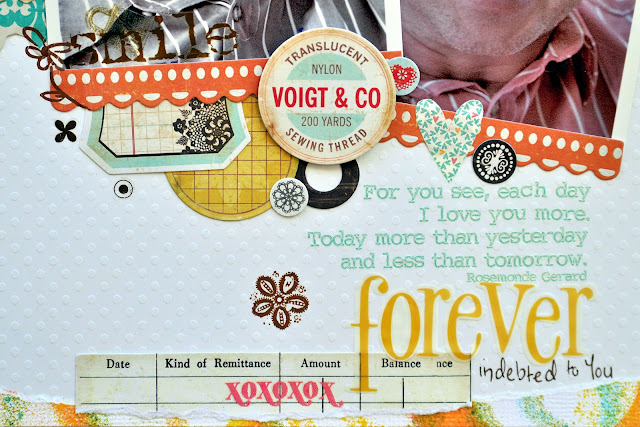 I got through quite a few old rub-ons here (don't much buy them anymore) mainly from Making Memories & 7 Gypsies...I THINK...and that circular sticker saying "Voigt & Co - Translucent Nylon" is very purposefully placed here as it contains a lot of significance with regard to my husbands's line of work. 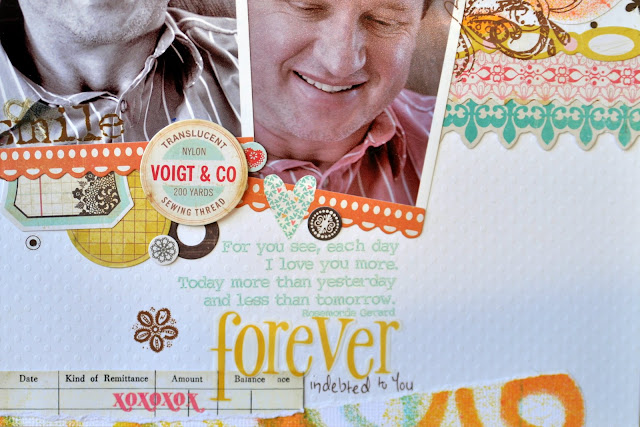 Luckily one of my rub-ons was a quote - and the perfect one I needed too!  Alphas are handy Remarks stickers by American Crafts.  I added in a teeny torn strip of my misted paper, to the very bottom edge of my layout, which finishes it off nicely I reckon. 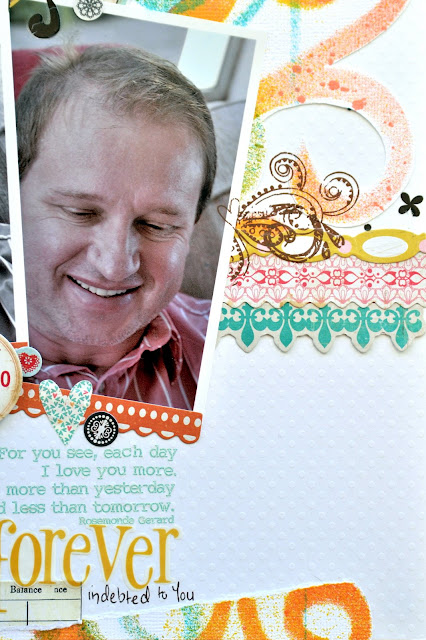 So no printed paper at all here just in case you hadn't noticed... 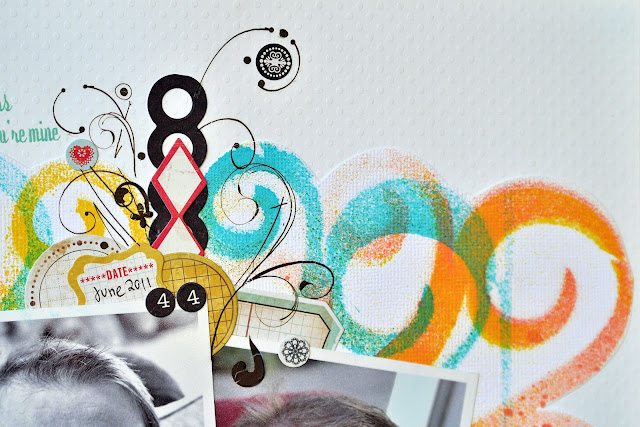 At the top there I have put his age in - 44 - using the numeral stickers from the same CP line, and a conglomeration of half-cut journaling stickers (used the other halves below the photos), layered up a couple of border stickers & added some flourish rub-ons & another small text quote. 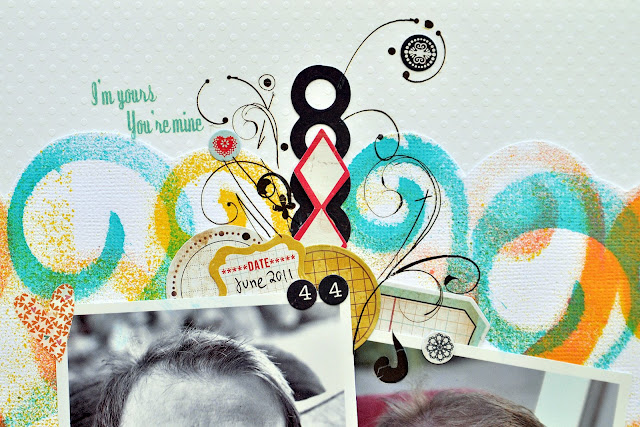 Supplies:-
White cardstock - Bazzill Swiss Dot & Bazzill plain white cardstock
Mists - Maya Road Sunflower Yellow, Orange Sherbet & Blue Hydrangea
Border & journaling stickers - Crate Paper Emma's Shoppe
Rub-ons - 7 Gypsies & Making Memories
Journaling Pen - Creative Memories
Alphas - American Crafts Remarks (Beckett - Dandelion)
Adhesives - Tombo Mono Glue, American Crafts tape runner, Glue Dots, Pop dots.
SO REMEMBER TO SAVE THE SKETCH & PLAY ALONG TO BE PART OF ONE OF THE MOST HIP & HAPPENING SKETCH SITES ON THE WEB - NOT TO MENTION THE POSSIBILITY OF WINNING ONE OF THOSE
A-W-E-S-O-M-E PRIZES
REMEMBER???!!!
Just remember to not leave it tooooooooooo much to the last minute as Once Upon a Sketch works on Australian Standard time which is 12 hours ahead of EST I think...

Email ThisBlogThis!Share to TwitterShare to FacebookShare to Pinterest
Labels: Crate Paper, design teams, Once Upon a Sketch, online challenge

Hey Helen!!!
YEP! When I seen this on the OUAS, I thought your Layout was Utterly FAN FAB U LAS!!!!!!
Gr8 Pic of your Man, Really like the Colors & Awesome how you have added Crate Paper Emma Shopp here.....

stunning Helen .. loving all your embellies and the colours you have chosen are awesome, beautiful work as always ... love the photos ... I can see the love .. hugz x

Another 'fabbie', Helen....the masking is wonderful, and it IS lovely to see your Shane...they do put up with a lot, our OHs!
Alison xx

Makes me miss scrapbooking sooooo much!

Love your layout and the one in your previous post.

helen a very interesting use of borders...i love your swirls too!

Love the painted swirls in this Helen.
Gorgeous lo and sweet pics of your dh.

Hi girl, you ARE so fast!
And he IS cute!
AnD thank you so much for lovely comments about my LO!
Yes, I have visitors from SA, some are my friends :)

Hadn't noticed the no pp till you pointed it out. The swirls look so cool! LOVE this page :).

Oh Helen you always do such amazing work!! Love the different coloured misting...you do this so perfectly! Just doing this sketch today..loved it so much :))xx

Hi Helen!
Loved your LO the moment i saw it! I looked at the masked swirls for minutes, i love the colors. Really fabulous page, as always :)!

I luuuuurve your misting and the multi colors. Looks fabulous and I just love those photos. It is so nice to see a man in LOs.
And yep, I agree re the friendship thing. You say so many things and I totally get it. What a shame we have a big ocean between us.

Hi Helen what an awesome layout, love how you used a pic in black and white and colour makes the whole thing stand out, love the swirls and all the little references. Might get a chance to play along this month, like the sketch and the fact you have to use a quote, take care x

Congrads on having three layouts featured over at Imaginarium Designs...that's totally awesome!! I love your misted background swirls...and that you added a strip of it to the bottom of your layout...absolutely stunning! I also love that you used that accounting strip which ties in with your really cool title. So many gorgeous details on your layout...you've done an amazing job!

Goodness! Those swirls on the background are just gorgeous!!!! So eye-catching! Love all your little details too! :)

oh wow!! this is beautiful!! brilliant one helen!!

Wow..this is so beautiful...love the swirls...you are an artist!!!!

WOW ADORE your LO Helen.. loving the yummy colours and your masked swirls look fantastic!! I totally agree what a handsome hubby you have! Congrats on your features over at Imaginarium! Have a lovely weekend :))) hugs

Finally I get to see a proper close-up of the man with the pots and pans! he looks to be such a jolly nice chap, of course he puts up with the love of his life - you!! Love looking and reading all the secret code you have hidden in your wonderful page, quite like Debbi Tehrani with all the fabulous details! Was sure woooting when I saw your features over at ID, congrats again! xoxoxxo

Woot Woot for you my friend, wow the misting using the negatives amazing, the layout is almost identical to the sketch, wow, the Imaginarium products I have to get my hands on, thanks for the link and the photos beautiful, I love the strip at the bottom of the layout too. Wow, inspiration galore here, gorgeous work my friend. Melxx

Shane is so very handsome, love the LO you created for him, every detail spot on!

What a lovely tribute to your husband.